I did get forced, I got a software service that forced me to buy more licenses.

on December 12, 2010
If you did visit Dreamforce 10 this year in moscone center, SFO, you have witness the Microsoft campaign about I didn't get forced. If you didn't, well, you were not at Dreamforce. 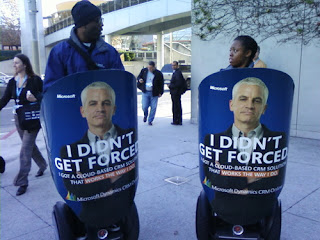 So the campaign from Microsoft was fine, but apart from catchy phrases and possibly the attempt to bank on Salesforce customers, the campaign was sheer lie. Now, I should add a disclaimer, I do not work for/ work with  Salesforce.com and also, they do not pay me to say this, but this is based on my experience.

I was a dedicated .Net developer (and still prefer that over Java any-day) and a few months ago I saw the announcement on Channel 9 about Azure.

I was excited, obviously, and registered for a CTP of the same. Now, I am a old timer with Windows and I have no intention of using jazzy animation, the thing girls at college used to shreak, (in fact, now I use windows only for Photoshop, rest all is ubuntu) so I was quite happy with windows xp and its slow yet stable operating system. Imagine my horror that to run azure, I had install IIS 7, which needed Vista or Windows 7.
When contacted, I received a reply that Microsoft won't be supporting XP anymore. What was more, they further mentioned that I need to pay for new Vista or windows 7 licenses. Now, thats not fair is it? Forcing users to buy more crap from you.

Aah, now you know, why I suddenly switched to ubuntu. As far as microsoft is concerned, here is my answer to them, in the classic angry birds style. paaathooooo.... aaah... (that is what is keeping me glued on my android)

So long then.
"Good bye, old friend. May the Force be with you." 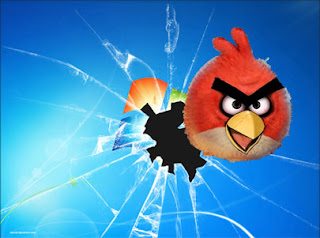