The Monk who sold his Computer for the Cloud 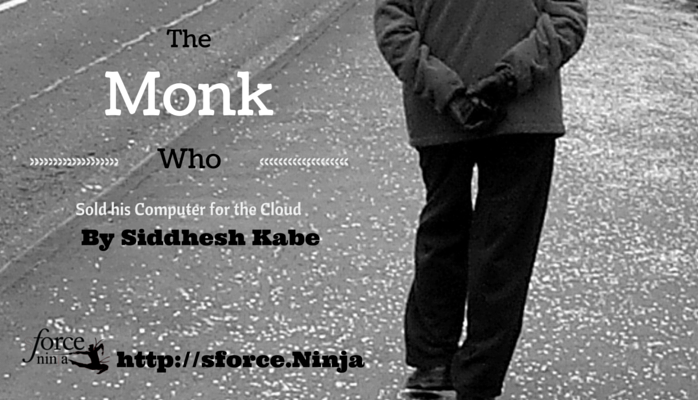 The first computer I ever saw in my life was a desktop that my father gifted to me during my second year of computer engineering. The specifications were a 1 GB of RAM, 40 GB HDD, a modest LG monitor, an Intel P5 Dual Core processor and an Inverter (this came separately and since we were in India, a battery inverter was necessary). The installation was so space consuming that we had to invest in a computer table (no other place could accommodate this machine) that had options of keeping CPU and inverter and Printer under the table, a foldable keyboard and mouse holder and a monitor. This was ten years ago and by the standards back then, my father had purchased the best computer in town.

My father is a perfectionist, and hence he insisted on building a shelf/ library over the table that would complete the look of a decent computer workstation. This was the computer that accompanied me during my engineering days. The endless hours spend over playing with MS Paint, writing hacks in Excel and sending it to friends. I used to write first draft of my stories on the machine, I used to listen to songs for endless hours. Purchase DVDs and listen to them until they are scratch. I had 9 pen drives, with which I used to carry my data to my college.

The last three smartphones I had support 64GB of memory space. They all had Quad Core processors, were much faster than my computer and could fit in my pocket. The things that I did with my computer, now I do with my phone but I do it without getting chained to the workstation. I play my favorite GTA Vice City, over again on my phone. I left my home town around eight years back and have been travelling since. Carrying a phone with me was much easier than carrying the machine. I remember having 12GB of songs on my Computer. Now, I use the paid service of Gaana.com, the online music station. And you know what? Even while travelling on the cold foreign streets of London, the friendly voice of Arijit Singh accompanies me. My data is safely backed up on cloud servers and not just mobile data. The old college files, the projects reports everything.

Because many people asked for it, updating the post with the common task I needed computer for that have been replaced by the cloud.

Thats the easiest thing anyone can relate to. How do I create documents, the dreaded excel sheets and powerpoint presentation. The common answer would be Google Docs but somehow in past few days, I am not really in Moodle for Google (neither am I switching back to the old nemesis microsoft). I used Zoho Writer to edit my novel online. I preferred their services much better than other online tools.


2. Create Graphic for the blogs

Creating graphics is as old as computer itself. And when it comes to creating graphics, no one does it better than Photoshop. Photoshop was hard to replace but two services have given me more joy that anyone ever could. One is Pixlr.com and Canva. Canva helps me layout stuff with text, like the title graphic of the blog while Pixlr.com lets me create and filter images easily.

When I am not doing anything, I am busy creating presentations. I love those things that move around. You can see some of the things I created on my site showcase. Most of the presentations on the page are created using Prezi.com the online 3D presentation maker. Prezi gives an extra dimension to the presentation and that wow factor helps.

I have used many corporate tools for making infographics. The best one was obviously illustrator, adobe knows how to do stuff right. But then can I make infographics online? I tried with pixlr but since there was a screen limit with their editor, making a long infographic like the one for cloud computing was a tedious job. Just when I thought, I am losing the challenge, ta da, Cacoo.com came to the rescue. Cacoo has an easy to use interface where you can create beautiful graphics for free. They offer 25 diagrams on the free license which is really cool.

One of the many things you need a computer and those little USB drives is transfer of files. During my college days when I did not have a computer, I used to carry a rewritable CD in my bag and borrow CD writers on my friends computer to burn disc. Things changed and we now have those USB drives. So the real question here was how do I transfer more than a GB of file? Now in real world scenario there are very few things that are more than one GB, however lets say I wanted to transfer a heavy file? And there Dropbox came to rescue. What was more with the camera upload feature, I did not have to do anything. When I took photos, they were safely upload to dropbox and all I had to do was share it with my friend.

When was the last time you stepped into a DVD store and purchased a nice DVD, picked up a bottle of whiskey and made some pop-corn. If you never did, I highly suggest you do. Anyways, so since this was a post computer world, the best alternative I found online was bigflicks.com. It is a on-demand movie site that streams bollywood movies. It also streams selected english movies. I recently got a subscription for NetFlicks which streams English films and serials.

Listening to songs while doing stuff is one of the many things one can do. However, iTunes has already brought those on cloud. Just like movies, listening to songs is also a regional thing. One of the best service I use regularly is Gaana.com It streams not only bollywood but also regional marathi songs. For Internet radio and songs I switch between Spotify and Pandora

I am the monk who sold his computer for the Cloud. Are you?